COVID-19 Variants in Hong Kong: Why Are They Important?

HomeKnowledge BaseCOVID-19 Variants in Hong Kong: Why Are They Important?

All viruses have a tendency to evolve over time. Random change in genetic structure is the basis of evolution. Covid-19 is caused by an RNA virus. RNA viruses have a tendency to evolve rapidly. The SARS-COV-2 virus has already undergone many thousands of mutations, indeed almost every single infection in Hong Kong has its own 'genetic fingerprint'. This is one of the ways we are able to connect infections to each other. We follow how closely the ‘fingerprints’ match. This is how scientists are able to tell if new infections have been imported into Hong Kong and also if they could have been picked up in quarantine hotels.

In late 2020, researchers in the UK identified a new variant which was shown to have 23 mutations some of which are on the gene that codes for the spike protein. This variant is now called the Alpha variant. Different variants were also recognised in South Africa (Beta variant), Brazil (Gamma variant) and India (Delta variant). Whilst the exact position of the mutations are different they share a number of characteristics including change around the spike protein and evidence of increasing transmission rates. That is to say, these variants are more infectious. There is also some suggestion that they may be responsible for more serious illness. They are responsible for the sudden and rapid increase in infections which we saw in Europe, South America and most recently in India.

As an example of the potential for an epidemic surge, the rapid expansion of the Alpha variant from the South East of England throughout the rest of the country is dramatically demonstrated in the video below. The darker colours represent the percentage of cases caused by the new variant over time. The new variants have already spread worldwide. These variants have led to accelerations of the epidemic in the regions in which they seed. Epidemic modelling of the variant infections confirms an increase in the R0 values, an increase in the viral load and an effective increase in transmission rates for the variants of concern of around 50-70% for the Alpha variant, more recent investigations suggest that the Delta variant may be a further 40% more transmissible. There have been some reports that the new variants may be associated with an increase in disease severity but there are also factors of overwhelming of health systems during evolving epidemics. More research is needed to be certain about disease severity.

We have previously explained the important difference between the severity of a disease and the severity of an epidemic. Covid-19 has the potential to overwhelm health systems because of the rapid increase in numbers. The graph below demonstrates this issue. It compares a disease which is 50% more severe, continuing with slightly higher fatality rates, versus a disease which is 50% more infectious, producing a significant increase in mortality due to the rapid increase in the number of infected cases. 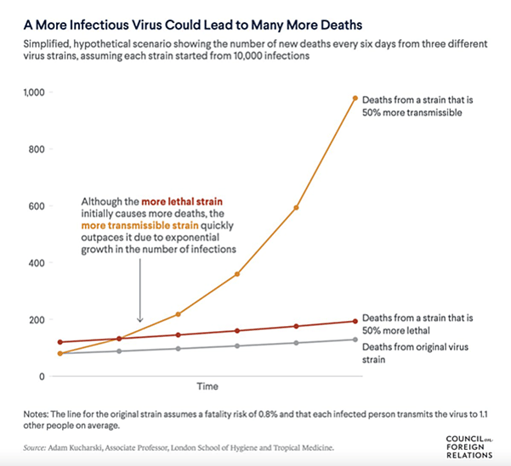 It is easy to lose sight of how well the epidemic has been managed in Hong Kong. Covid-19 is a mild disease in the majority of circumstances, but it has the potential to overwhelm health systems because of a potentially rapid increase in the numbers of infected patients. Avoiding excessive strain on the hospital system is one of the main goals of the public health controls. The new variants increase the risk of an epidemic taking hold and spreading quickly. We have seen recently in Taiwan how brittle a zero Covid strategy can be.

We currently offer to test for COVID-19 Post-Vaccine Antibodies.