Book an Appointment
HomeBlogWhat are the risks of a new Covid variant from China and what do we know about the XBB.1.5 variant?

What are the risks of a new Covid variant from China and what do we know about the XBB.1.5 variant?

All viruses have a tendency to evolve over time. The SARS-COV-2 virus has already undergone an enormous number of mutations, almost every single infection has its own 'genetic fingerprint'. This is one of the ways we are able to connect infections to each other. We follow how closely the ‘fingerprints’ match.

Immune escape, transmissibility and the danger of epidemic waves

When viruses mutate the vast majority of random mutations confer no benefit. However, every so often one can develop an inherent advantage. Typically this advantage manifests either by immune escape, essentially the virus becomes better at dodging existing immunity or by being increasingly transmissible, better at travelling from person to person within populations. Whether a mutation produces mild symptoms or severe disease is dependent upon other factors, the most important of which is the host response. That is existing immunity in addition to general health and well-being.

I have previously explained the important distinction between a disease and an epidemic. Ultimately the harm to populations in infectious disease is driven by the severity of the epidemic not by the impact of the disease on a case by case basis. As we have seen with Covid, a disease may have a relatively low fatality rate, but if it is highly transmissible it has the potential to overwhelm health systems because of the rapid increase in numbers. The graph below demonstrates this issue. It compares a disease which is 50% more severe, continuing with slightly higher fatality rates, versus a disease which is 50% more infectious, producing a significant increase in mortality due to the rapid increase in the number of infected cases. 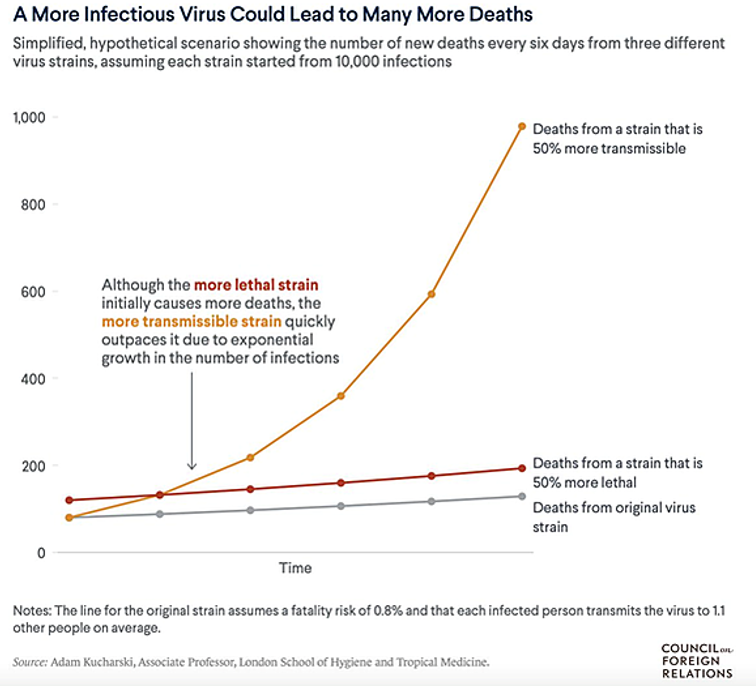 As an aside, this is exactly why a public health response should be handled by experts in epidemics not experts in disease. The training and the expertise are completely different.

The management of epidemic waves

A mutation with an advantage in immune escape or transmissibility may kick off waves of infection in the population. This is what we have seen with the Alpha, Beta, Delta and various Omicron subtypes over the last 3 years.

Management of these epidemic waves involves pharmacological and non-pharmacological (NPI’s) interventions. Pharmacological interventions being vaccines and drugs and NPI’s being everything else. NPI’s includes masks, handwashing, social distancing restrictions etc. These non-pharmacological interventions are used to suppress the wave of infections and minimise pressure on the health system as the population gradually builds up an immunity wall. It is important to appreciate that NPI’s mostly delay rather than prevent numbers of infections. They flatten the curve and spread the infections over a longer period of time. This buys time to develop vaccines and drugs but most importantly it also protects health systems. 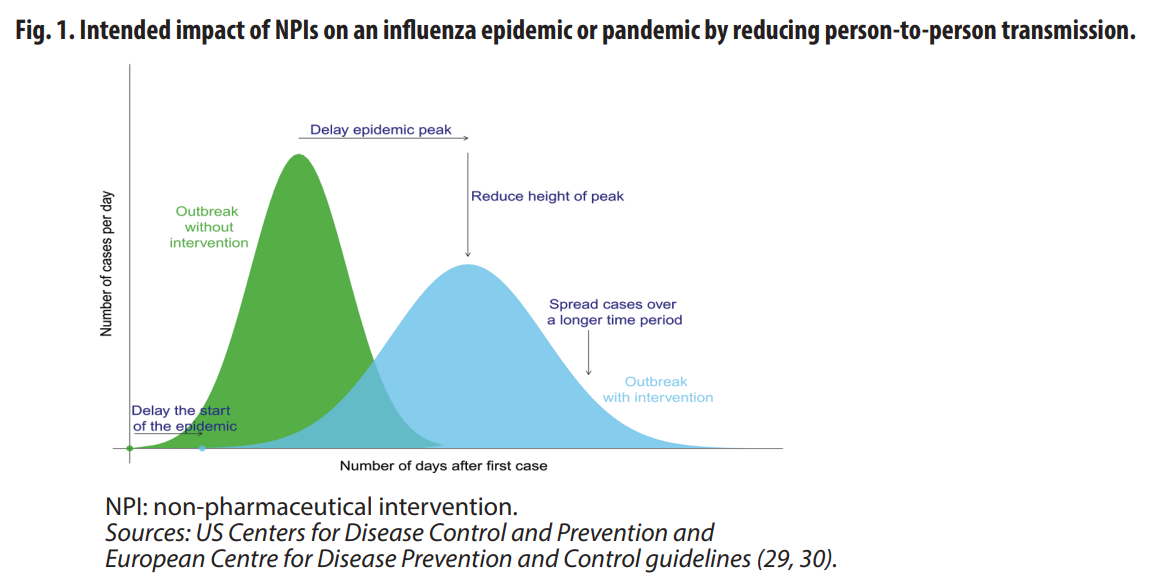 Fig 2. Non-pharmacological interventions (NPI’s) mitigate infective waves by spreading the infections over a longer period of time. The total number of infections is very similar but ‘flattening the wave’ protects the health system[1]

When viruses mutate they are competing for market share, rather like a new product may do. I have used this simplistic analogy previously considering a mobile phone. Imagine an infinite number of Nokia flip phones and other electrical parts smashing randomly producing an increasing volume of electrical waste. At some point, out of these limitless collisions, a new product is randomly generated. It looks a little like an early smartphone and immediately it becomes popular and starts to build market share. The new mutation acts a bit like the iPhone 4, it seemed like it was good at its job, but it evolved, and the iPhone 5 was better and quickly became more popular. Often the evolution is gradual maybe the 5S but occasionally there is a leap, a larger screen, better camera and over a relatively short time that particular model becomes dominant. It’s the one that everybody wants and it tends to take over. Other companies mimic the success of the most popular brand. This is the way that viruses compete. Random mutations almost always give no or marginal benefit but occasionally we find a sudden jump and the virus becomes much better at travelling, fitter and faster, it spreads through the population more easily. From an evolutionary perspective any mutation which develops these advantages by chance is more likely to take a hold and spread.

As mobile phone use spreads eventually almost everybody has one. By the time we get to the iPhone X we had lots of variations from different companies but they all essentially have the same functions. The size of the available market is smaller. Over time some phones break and people need to replace them, this could be similar to the waning immunity that happens after infection or immunisation. Regardless the available market is never as big as before. Unless a new mutation arrives. A product which offers something significantly different. Something so different that everybody wants one.

How great is the risk of a new variant from China?

When Covid swept through India it resulted in the Delta variant. Mutations are generated by random events and as such the concern about the huge epidemic impacting mainland China is natural and appropriate. On one level it is about probabilities and the sheer number of potential events. However, until recently China was a relatively infection naive population. Because of the population benefit of zero Covid there had been relatively few natural infections, although there is some vaccine-induced immunity. The strains circulating in China are predominantly old strains which have already been circulating in the rest of the world over the last two years but especially those of the last six months[2]. In this sense China is like a new market which has suddenly been exposed to products which are tried and tested in the rest of the world. Whilst these products are likely to take off and spread very quickly, because they are already established elsewhere and confer such enormous advantages to what is available locally, there is actually less inherent adaptive pressure for mutations with extra advantages to take over.

This is not in any way to dismiss a reasonable concern about variants, but it seems more likely on the balance probabilities, that the huge wave currently impacting China will burn through quickly and accelerate the return to normal within the mainland.

As may be expected from the description above, the pressure for adaptive responses tends to be greatest as waves mix over time within populations with some degree of immunity. The XBB.1.5 was first seen around October in New York. It is a variant of Omicron deriving from the XBB line which originated with a combination of two BA.2 variants. This variant has accelerated relatively quickly and is now responsible for approximately 40% of cases in the US. Importantly the variant appears to have advantages in both immune escape and transmissibility. One of the mutations in this variant (F486P) helps the virus to avoid, to some degree, existing immunity from previous infections and vaccines. This mutation has been around for some time in earlier forms but those prototypes were not very good at attaching to receptors in the airways. The XBB.1.5 variant maintains high levels of immune escape but is also able to attach more efficiently to receptors enhancing its ability to transmit infection.

There is no evidence to suggest that this variant is responsible for more severe disease and as previously the population impact will be determined by whether it triggers a wave and if so to what degree. Hong Kong has recorded very few imported cases of XBB.1.5 so far and has recently experienced an infective omicron wave. The population has a relatively good immunity wall at this point. It is also important to note that XBB.1.5 did not take hold in Singapore last year.

The natural history of Covid is such that we must be mindful of expecting the unexpected. However, for the reasons above, the large wave in the mainland is most likely to accelerate a return to normal in Hong Kong and China. For the US and Europe, the highest risk of a Winter wave may well be XBB.1.5. We advise our patients who may be travelling to be up-to-date with their booster doses in addition to taking influenza vaccination which is likely to be a problem this northern hemisphere winter.

COVID-19 Traveling Restriction Update
What next for China? Lessons from the Covid response in Hong Kong and Singapore
Questions and Answers about the New COVID-19 Bivalent Booster