Book an Appointment
HomeBlogWhat next for Hong Kong: Dynamic zero or mitigation?

What next for Hong Kong: Dynamic zero or mitigation?

Answer: Mitigation is not only the most rational option for Hong Kong. It is the only option.

In two previous articles I asked whether the biology of Omicron would force a change in Hong Kong public health strategy. In the second article I asked what a Plan B may look like.

In the interim, the epidemic has continued to evolve with a doubling time of around three days. The government has introduced a number of policy changes. Although the political narrative continues to be around ‘Dynamic Zero Covid’, the policies have predominantly focused on mitigation. How to understand this apparent conflict?

Early in the pandemic there were broadly two strategies employed internationally.

Pre-vaccination these were the only strategies available. We now have very good evidence that elimination was the best strategy. Mortality rates from countries which eliminated are significantly lower and in general disruption to daily life and the negative impact to economic activity was also lower in the elimination countries.

Once effective vaccinations became available, a third option opened up. That is to vaccinate, to as high a proportion of the population as possible, preferably from the most vulnerable down and then to use public health measures to mitigate the final exit wave moving towards ‘managed endemicity’ or ‘living with Covid’. This is the strategy chosen by Singapore following an initial phase of elimination. Denmark followed the suppress and lift strategy but has recently transitioned and removed all remaining public health restrictions. The graph below shows the benefits of countries which eliminated. It also shows that failure to eliminate does not inevitably mean disaster. Some countries, such as Denmark, actually did much better than others. 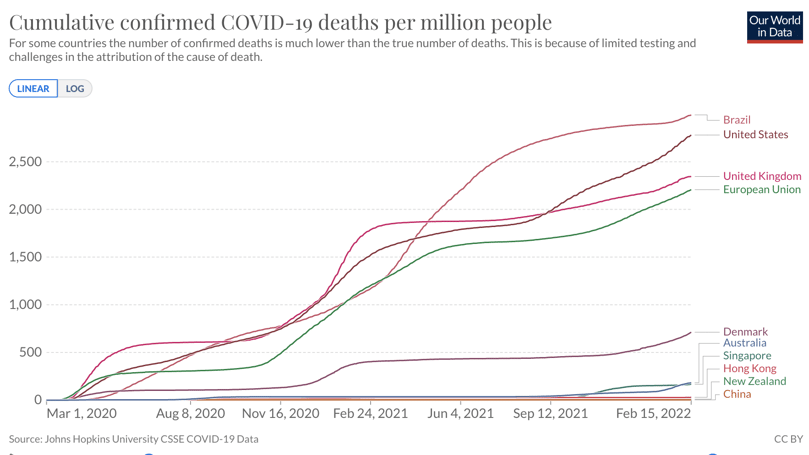 Which is the best strategy?

Elimination was initially the best strategy for Hong Kong. Once effective vaccinations became available, the negative framing and policy around zero Covid adversely impacted vaccination rates, especially in the vulnerable. The messaging around zero risk was not only unscientific, it also paradoxically increased the risk to population health.

The current policy is almost certainly increasing risks in both the short term, via quarantine infections and the long term by diverting priorities from the single most important public health intervention, which should be increasing vaccination rates in the old and vulnerable.’

- Is Hong Kong’s 21 Day Quarantine Evidence Based or Justified. October 2021.

Despite the narrative of blame, it was an unscientific policy justified as ‘prudence’, which triggered the fifth wave.

In the early stages of the pandemic elimination was the best strategy. At some point, the cost of elimination in terms of both public health measures, but also the risk to population health, exceeds the costs of a mitigation strategy. It may well be that elimination remains the best strategy for China because of factors in the political system in addition to the capacity and expertise in test, trace and isolate as a policy. In my opinion the cost of elimination exceeded the benefits to Hong Kong by mid to late 2021.

Is it possible that we can get back to zero with the current strategy?

The University of Hong Kong recently published a modelling study looking at the likely impact of the Omicron epidemic in Hong Kong. HKU has world-renowned experts in disease modelling. It is important to understand that modelling is used to consider the impact of different scenarios. It is not intended to advocate one particular policy. In modelling the results change depending upon the chosen inputs. The study is available here.

In summary the model suggests that the Hong Kong epidemic is likely to peak in mid-March and we may be expected to see around 1000 total deaths by June if we continue with current social distancing regulations. If we were to relax the social distancing regulations to the previous level, total deaths are likely to increase to 3,000 - 5,000 rising to 7,000 or more if the hospital system is overloaded. At the peak, significant numbers of people will be expected to be isolating due to either infection or quarantine.

The study also considered a scenario in which the city was locked down. This became the main media focus. My own analysis is that even using the inputs from the study, a lockdown would have been protracted and it is unlikely that it would have worked. It is regardless too late and is not in the interests of Hong Kong's population health.

It is also hard to see the recently suggested citywide testing working. It is quite possible that we will be past the peak of the wave by the time this is instituted. Regardless, diverting the resources towards widespread rapid testing would be much more effective in mitigating the epidemic and may even allow us to open schools, as explained by Professor Cowling in our recent Podcast.

So have we transitioned to mitigation?

In my previous article I suggested the following criteria as a component of Plan B:

Subsequently the government did increase social distancing regulations in addition to a vaccine pass, at least in part intended to boost vaccination rates. Vaccinations have also been rolled out to children. There has been an agreement with China to provide large numbers of rapid tests in addition to guaranteeing food supplies. Both are key factors in managing the inevitable disruption of the next few weeks.

In summary, although the narrative continues around dynamic zero Covid in reality the government policies have tended towards mitigation.

Does it matter what we call our strategy?

The most important priority in any public health strategy is to define the public health goals, develop strategies to best achieve those goals then positively communicate the actions needed to achieve them. Failing to explicitly define and explain a policy has the potential to be actively harmful to population health.

As an example, in an elimination strategy, it may make sense to keep asymptomatic people in hospital to minimise the risk of community spread. In mitigation, we need to prepare our hospitals to treat sick people. It may seem counterintuitive, but in a Covid pandemic the last place we want infectious people is in hospitals, unless they really need treatment. The vast majority of people can be managed at home.

The large numbers of people in queues for compulsory testing and especially the people being sent to hospital with positive rapid tests both significantly increased the risk of an accelerating epidemic. We are already seeing a sharp rise in illness and isolation in healthcare workers. It seems inconceivable that the health system can continue for long without a change in strategy.

Positive communication was the first item in my Plan B for a reason. It drives everything else. We are at a crossroads. Doing one thing whilst saying another is no longer feasible.

Will mitigation lead to greater loss of life?

Answer: No, the point of mitigation is to focus our energy, resources and efforts on minimising harm.

I have heard a number of officials talk recently about the fact that in Hong Kong we value life and would not want to be in a situation like the US. I agree, however this narrative shows a misunderstanding of our options. In some way this is a reflection of the dangers of zero Covid without any plan for exit. Population messaging suggesting that lives can be saved by keeping Covid out of our city forever are disingenuous. People are going to die and it is a question of how we can minimise population harm from the disease. We would be better to compare ourselves with Singapore and ask whether continued dynamic zero Covid or active mitigation are likely to give us the best result. Mitigation is in the best interests of the population.

For a significant majority of the population, Covid is a mild disease. A recent study in the Lancet suggested that up to 90% of cases were asymptomatic[1]. For the majority of people who have symptoms this will be somewhere between a mild cold and a bad flu.

I am not in any way belittling the importance of Covid. The greatest threat of Omicron in the rest of the world was not the severity of the disease, but rather its extreme infectiousness. It arrives as a large wave. From a population perspective, the greatest threat to population health is the collapse of the health system. We know that in this situation, all cause mortality increases, at all ages. People die not only from Covid, but also of other treatable conditions, such as heart attacks or asthma. The greatest threat of Omicron is to health and supply systems due to infections and isolation in healthcare and other key workers. The primary goal of public health measures is to protect these systems.

One urgent priority is to transfer asymptomatic and mildly symptomatic patients out of the hospitals and preferably to home, or to government facilities when home is not possible. The recent images of patients waiting outside hospitals are disturbing and create anxiety. The hospitals are currently overcrowded partly because we have admitted people who don’t really need to be there. Over the next few weeks they will become full of people who really do need to be there. We have very clear evidence from numerous international studies that the single most important public health intervention in the Covid epidemic is vaccination from the most vulnerable down. It is not the absolute number of people that we vaccinate that makes the difference to population health, but ensuring that the highest proportion of the most vulnerable is vaccinated. The HKU modelling study reinforced the importance of targeting vaccinations to the most vulnerable as quickly as possible. In order to achieve this and to minimize the harm to our population, we need positively and actively communicate a strategy focused on mitigation.

Topics: COVID-19, What Next for Covid