In a recent press conference, the Chief Executive indicated that her medical advisors had suggested a change in the working definition of mortality in Hong Kong. Comparing mortality rates can be notoriously difficult, especially early in epidemics.

A case is an infection which has been diagnosed. This diagnosis may be clinical or by testing depending upon the circumstances. In Hong Kong, Covid cases are defined by a positive test result reported or notified to the government.

Infections represent the total number of infections both diagnosed and undiagnosed.

This is the provisional CFR in Hong Kong based on age and vaccination status.

How many infections are not diagnosed?

In Hong Kong, in the earlier waves, we estimated there to be approximately four times as many infections as cases. In other words we estimate that we diagnose about one in every four infections. There are many reasons why infections may not be diagnosed:

Which measure of mortality is most useful?

IFR is the most important measure to individuals because it gives a better assessment of individual risk on a case by case basis.

CFR is easier to measure but comparisons are difficult, especially early in epidemics. CFR is influenced by the amount of testing performed and deaths lag diagnosis, sometimes by months. These factors can distort comparisons between mortality rates over time and in different locations.

What do we know about Covid mortality over time?

Early on in the pandemic we used data around influenza to provide an established and recognised anchor around which to assess evolving risk. Unfortunately, the influenza comparison became politicised. Covid is not influenza, it has a higher attack rate, affects more people and has been more serious as an epidemic. However, it remains an established and known entity against which we can compare evolving risk. The chart below shows the changing mortality of Covid. Population immunity both from infections and vaccination, improved treatments and less severe variants mean that on an individual basis the risk posed by the disease has fallen significantly.

Below age 60 the IFR from Covid is now less than influenza on a case by case basis.

What factors influence mortality from Covid?

Mortality of Covid is highly skewed by age and Co morbidity Below is the age related risk. An 85 year old is 10x more likely to be hospitalised and 340x more likely to die than an 18-29 year old. 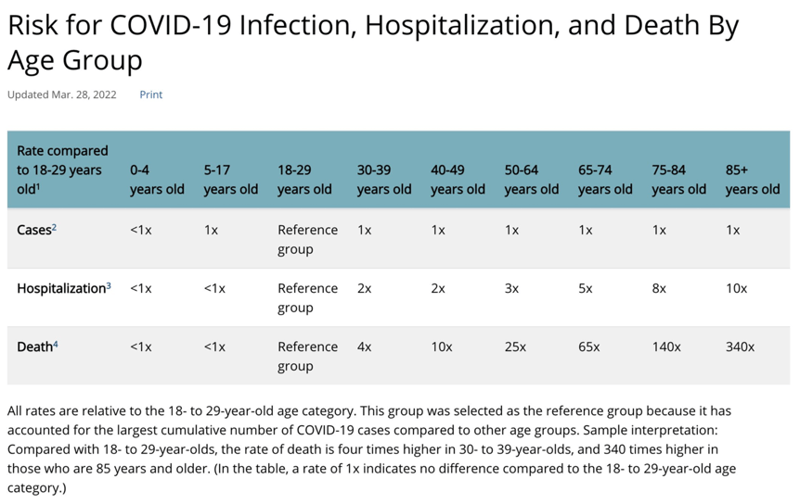 Vaccinations significantly reduce this risk to all. We consistently advocated vaccination from the most vulnerable down in order to protect both the vulnerable patients themselves but also the health system. In Hong Kong 96% of deaths occurred over the age of 60 yet the highest fraction of the unvaccinated segment of our population remains the elderly.

Questions and Answers about the New COVID-19 Bivalent Booster
What next for Hong Kong Part 6: Not lying flat
Ep 017: The Evolving Sixth Wave, the Evidence for Vaccines and Masks, Long Covid in Hong Kong and Possible Lessons from the 1889 Russian Flu Pandemic