In our December newsletter, we referred to the newly evolving omicron variant and made the following statement

‘This significantly increases the risk of a virus getting into our city, however tight our border controls. In our opinion, the risk benefit has tilted in favour of early vaccination and we would advise OT&P patients to receive their booster doses as soon as they become eligible for them.’

In the interim, the fifth wave is now clearly established. We have considered the options for Hong Kong in two further articles and a Podcast

Looking at the international evidence for the transmissibility of Omicron, in addition to the number of unlinked cases and positive sampling from sewage, there are now numerous transmission chains within the community. As expected messaging and communication from experts and officials have been mixed and often contradictory. The recent announcement of work from home for government officials means that we are at almost the same level of social distancing restrictions as the fourth wave. The fourth wave was only just controlled and omicron appears to be three times as transmissible. It seems increasingly likely that we will see an enlarging epidemic over the next few weeks and a change in strategy whether planned or forced is now the most likely scenario.

We often see patients who suggest waiting to get their booster doses until they travel later in the year. The nature of the evolving international epidemic means that risk is likely to be higher over the next 3 months in Hong Kong, than the subsequent 6 months in the rest of the world. We would strongly recommend any of our patients who have not been vaccinated or boosted to get their immunizations now. For anybody who still needs convincing of the benefits of Covid vaccination, the pictures below are worth a thousand words. Mortality rates in US and Switzerland in unvaccinated, vaccinated and boosted patients. 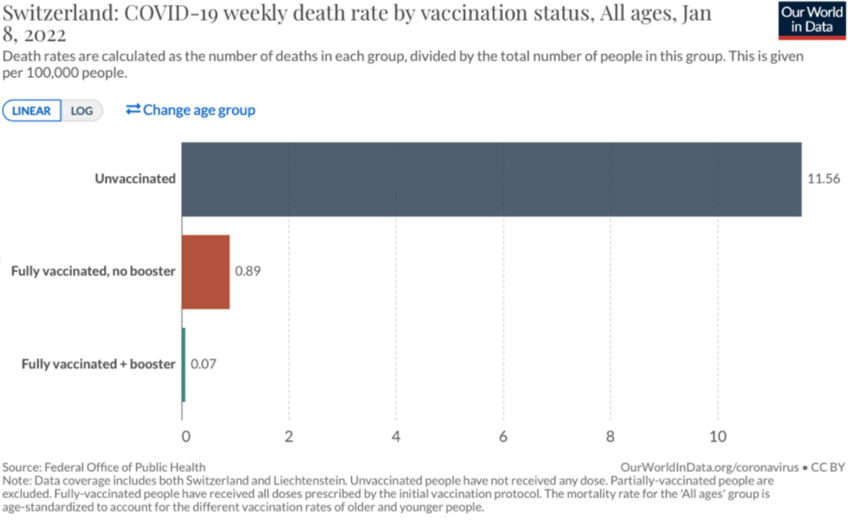 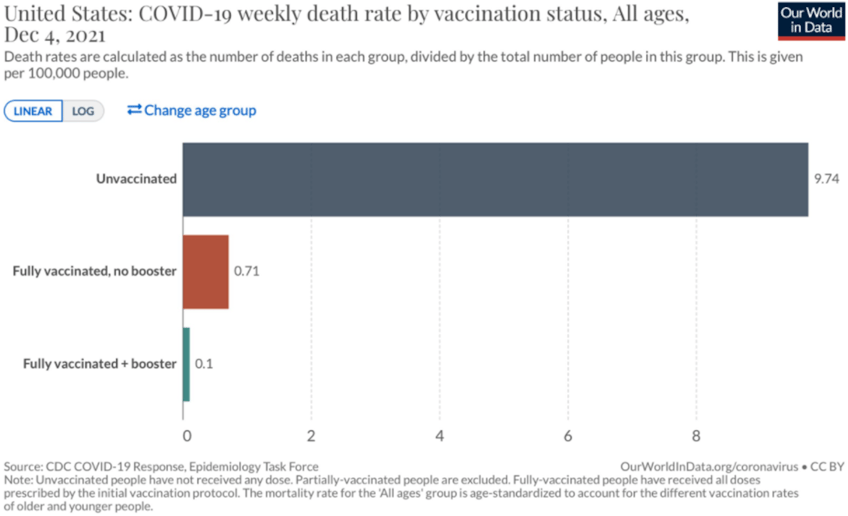 Throughout the pandemic we have emphasised the distinction between the disease and the epidemic. Information about the disease predominantly tells us about the impact on individuals. The human brain is not good at assessing relative risks. We often conflate probability with perceptions of severity. Hence, we worry more about sharks than mosquitoes. Early on in the pandemic we used data around influenza to provide an established and recognised anchor around which to assess evolving risk. Unfortunately, the influenza comparison became politicised. Covid is not influenza, it has a higher attack rate, affects more people and has been more serious as an epidemic. However, it remains an established and known entity against which we can compare evolving risk. The chart below shows the changing mortality of Covid. Population immunity both from infections and vaccination, improved treatments and less severe variants mean that on an individual basis the risk posed by the disease has fallen significantly. In population terms, it is factors which drive the evolving epidemic which are most important. Covid, especially more transmissible forms like Omicron,  produce a tsunami of infections. The size of the wave means that even a small percentage of a very big number can be a big number in a short time. This can lead to the overwhelming of health systems and for this reason Hong Kong is likely to increase the intensity of social distancing in the short term even if we do choose, or are forced, to change strategy.

The next few weeks will be critical in determining the impact of Covid on Hong Kong over the rest of this year. In South Africa, Europe and the US, Omicron burned through in a wave over 6 to 8 weeks. Hong Kong is more densely populated but we also have widespread mask use and sophisticated testing and tracing. If the fifth wave is controlled and we return to zero Covid, we are likely to face a long and protracted period of public health regulations. The most likely scenario is that we have increasing public health regulations in the short term and a rapidly growing epidemic. It is possible that Hong Kong could mitigate and flatten the wave, possibly to spring or early summer. Ultimately, if the decision is made to mitigate, rather than try to eliminate Covid, we are likely to normalise more quickly although we will face significant challenges to the health system over the next 2-3 months. Ultimately, as we have consistently explained, the single most important public health intervention in Covid is to drive high vaccination rates from the most vulnerable down.

Kung Hei Fat Choi:  Wishing all our patients a healthy and positive Year of the Tiger.