Book an Appointment
HomeBlogCOVID-19 Mutations in Hong Kong: What Do We Know?

COVID-19 Mutations in Hong Kong: What Do We Know?

All viruses have a tendency to evolve over time. Random change in genetic structure is the basis of evolution. COVID-19 is caused by an RNA virus. RNA viruses have a tendency to evolve rapidly. Some RNA viruses, such as influenza, change their surface proteins such that they escape historical immunity and require new vaccinations. Other RNA viruses, such as Measles, mutate regularly but do not change protein structure, so the vaccine does not require updating. The SARS-COV-2 virus has already undergone many thousands of such mutations, indeed almost every single infection in Hong Kong has its own 'genetic fingerprint'. This is one of the ways we are able to connect infections to each other. We follow how closely the ‘finger prints’ match.

In the UK approximately 10% of positive cases of COVID-19 have genetic sequencing undertaken. This is an enormous scientific effort and results are shared internationally. In late 2020, researchers identified a new variant (501Y.V1) which was shown to have 23 mutations some of which are on the gene that codes for the spike protein. A different variant (501Y.V2) was also recognised in South Africa and a third variant (501Y.V3) in Brazil. Whilst the exact position of the mutations are different they share a number of characteristics including change around the spike protein and a suggestion of increasing transmission rates. There has been a relatively steep increase in cases of COVID-19 in different parts of the world over the last few months, most recently in India. This has been associated with an increase in the number of infections being caused by the new, more infectious variants.

As an example of the potential for an epidemic surge, the rapid expansion of 501Y.V1 from the South East of England throughout the rest of the country is dramatically demonstrated in the video below. The darker colours represent the percentage of cases caused by the new variant over time.

The new variants have now been identified in many other countries worldwide. These variants have led to accelerations of the epidemic in the regions in which they seed. So far, epidemic modelling of the variant infections suggests an increase in the R0 values, an increase in the viral load and an effective increase in the rate of transmission for the variants of concern of around 50-70%. It is possible that by chance, as any virus changes, it may acquire the ability to spread more easily. It is also possible that a viral mutation can lead to more serious disease, although statistically it is more likely that antigenic drift leads to attenuation. That is to say that the natural order of evolution more typically makes new viruses less severe over time. There have been some reports that the new variants may be associated with an increase in disease severity but there are also factors of overwhelming of health systems during evolving epidemics. More research is needed to be certain about disease severity but we have very good evidence that the variants are more infectious and more easily transmissible.

We have previously explained the important distinction between the severity of a disease and the severity of an epidemic. COVID-19 has the potential to overwhelm health systems because of the rapid increase in numbers. The graph below demonstrates this issue. It compares a disease which is 50% more severe, continuing with slightly higher fatality rates, versus a disease which is 50% more infectious, producing a significant increase in mortality due to the rapid increase in the number of infected cases. 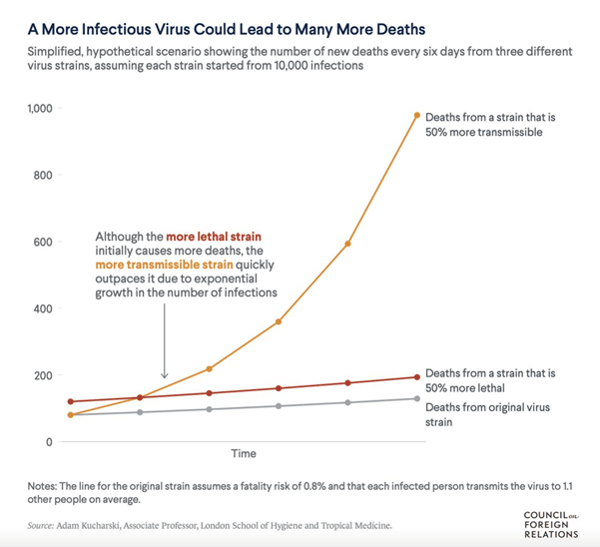 This is the reason that public health doctors continue to advocate for nonpharmacological interventions such as test, trace, isolate, mask wearing and social distancing and also why there is such a focus on the importance of vaccination even though the current numbers in Hong Kong are so low. When dealing with the inevitable frustrations of social distancing measures, it is easy to lose sight of how well the epidemic has been managed in our densely populated city. COVID-19 is a mild disease in the majority of circumstances, but it has the potential to overwhelm health systems because of a potentially rapid increase in the numbers of infected patients. Avoiding excessive strain on the hospital system is one of the main goals of the public health controls.

There are only two ways in which an individual or population can develop immunity, either by contracting the disease or through vaccination. The potential impact of these more infectious variants spreading through our densely populated city, makes widespread infection a serious health threat and vaccination remains the best way of developing population immunity and escaping the current public controls. There is already some early data to suggest that the new variants may be less susceptible to current COVID-19 vaccines. The current vaccinations continue to be highly effective against severe disease although they are slightly less effective against the variants for mild disease and transmission. One potential advantage of the new mRNA vaccines is that it is possible to change the structure of mRNA vaccines relatively quickly once the infrastructure is in place.

In summary, we already knew that some mutations of the SARS-COV-2 virus appeared to make it more infectious. As we have previously explained, COVID-19 is not a serious disease in the majority of circumstances but rather it is the nature of the epidemic and particularly the tendency to overwhelm health systems which causes harm. Fortunately, we have very good evidence that public health measures in Hong Kong, in particular test, trace, isolate in association with social distancing and masks are highly effective and there is no reason to believe that they will not continue to be so. The real challenge now is to overcome vaccine hesitancy and drive high vaccination rates higher.

We will update this information as further evidence accumulates.