The Russian Flu of 1889: Lessons for Long Covid?

In our recent Covid Podcast, Dr David Owens and Professor Ben Cowling touched on the Russian Flu Pandemic of the late 19th century. The evidence now points toward this pandemic being caused by a Coronavirus that transitioned from cattle to humans and then became one of the four Coronaviruses that now cause the Common Cold[1].

This 1889 Pandemic started in Central Asia and spread around the world, often along the railway connections. At that time there were excellent epidemiologists who kept detailed records of the disease as it evolved. The pandemic was “well-documented in many countries in several official reports, medical sources, and numerous press articles that covered the pandemic on a daily basis”.

Like Covid-19, the Pandemic came in several waves between 1889 and 1900. As you can see from Figure 1 the death rate peaked at 674 per million in London in the first wave, although in other countries subsequent waves were more severe. Also, like Covid-19, the elderly and those with comorbidities such TB and heart disease were most affected. The consequences for society are familiar, “patients flocked to hospitals where barracks and emergency tents were set up in the gardens” and “commercial activity collapsed, schools, colleges, universities, public services, transportation and factories were shut down”. The virus itself caused a multisystem disease, “there would appear to be no organ or tissue that has not become the subject of attack”[2]. 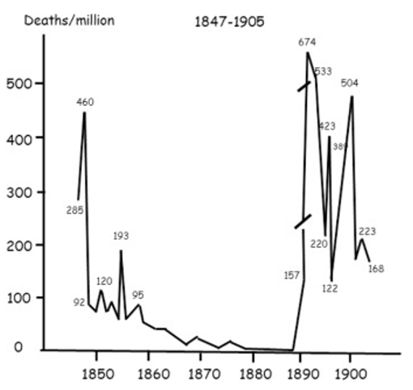 The “long” symptoms of this pandemic included profound fatigue, anxiety, depression and even psychosis. “Patients tell us that they cannot sleep, that they become depressed and despondent, that they are rarely free from pain, and that they fail in energy”, Figure 2 is a contemporary cartoon. As a consequence, the disease left thousands of convalescents weakened, depressed, in debt, and unable to work. The UK Prime Minister Lord Rosebery (see Figure 2) suffered a debilitating attack of insomnia after a brief bout of influenza. He wrote that his insomnia was “an experience which no sane man with a conscience would repeat” and that influenza had left him feeling like a “disembodied spirit”. 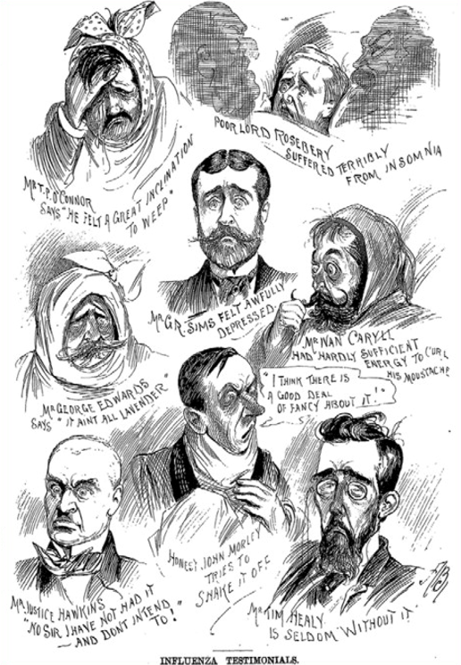 Fig 2. A contemporary cartoon highlighting the "long" symptoms of the Russian flu pandemic with captions:

Moonshine, a humorous periodical had the following cartoon
Mr O’Connor who “feels a great inclination to weep” might have depression
Lord Roseberry “suffers terribly from insomnia”, he could be suffering from depression, anxiety or even psychosis, thinking demons are lurking behind him
Mr Sims “felt awfully depressed”
Mr Caryll “had hardly sufficient energy to twirl his moustache”, today he would be diagnosed with Chronic Fatigue Syndrome
Mr Edwards who says “it ain’t all lavender” , may also be depressed
John Morley tries to shake it off “I think there is a good deal of fancy about it”. He is in denial of his symptoms
Mr Healy is seldom without it, that is fatigue judging by the picture

We now know that these “long” problems are caused by multisystem inflammation. In time we will know the full extent of Long Covid which can include increases in Cardiovascular Disease and brain changes as well as Chronic Fatigue and psychiatric disease.