Rowing across the entire Atlantic Ocean is what Hong Kong-based friends Martin Muller, Matt Bell, and Robert Lennox have challenged themselves to undertake this December. The team – known shorthand as East Rows West – has been training over the past year to compete in the annual Talisker Whisky Atlantic Challenge. Known as the “World’s Toughest Row,” all 30 teams will not only compete as a way to challenge their physical and mental endurance but also to raise money for charities of their choice.

From anywhere between 35 to 90 days, the rowing teams will each be on a boat that is only 7m long and under 2m wide as they race toward their destination in Antigua Barbuda. Each day, rowers will row for 2 hours, sleep for 2 hours, and repeat. Rowers will burn over 5,000 calories and consume around 10 litres of water per day. Going into the Atlantic, they could face waves as high as 20ft high. 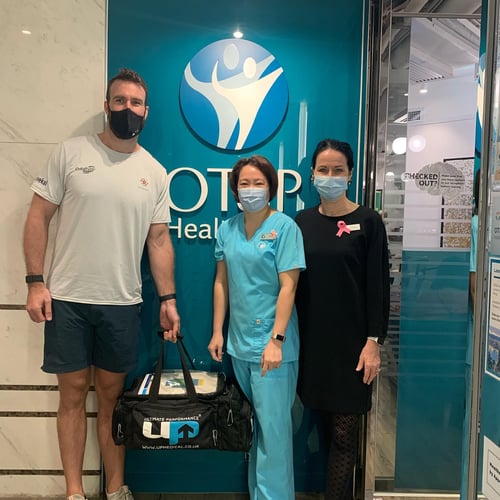 As an official sponsor of East Rows West, OT&P was eager to learn more about what the team’s physical and mental training has been like over the past year as they prepare to set sail from the race starting point in La Gomera, Canary Islands.

East Rows West knows a thing or two about pushing their physical limits: Martin, Matt and Robert are all rugby players. Martin and Matt hail from South Africa, and Robert is originally from the United Kingdom where they all had previous experience playing rugby. The three met in Hong Kong and have become close friends through their love of rugby and playing for the amateur rugby team Valley RFC.

However, the COVID-19 pandemic and the consequential restrictions changed up their rugby routine. All three men were looking for another way to challenge themselves during the early days of the pandemic while staying safe from the virus. That’s when Robert had a light bulb moment. Robert’s former mates whom he served within the British Military had competed in the Atlantic Challenge back in 2019 – and won. Robert thought it was the perfect challenge to train for, and Matt and Martin were fully on board. Thus, East Rows West was born.

Whereas their rugby training largely focused on shorter repetitions and “explosive” bursts of cardiovascular activity, East Rows West transitioned their workouts to focus on endurance training and improving their flexibility. Of course, rowing off Hong Kong’s shorelines has made for a very different – and more scenic – workout environment versus being in the gym or on the rugby pitch. To make things even more challenging, none of the three friends had any rowing experience prior to late 2020. They first started their rowing training through the Hong Kong Yacht Club doing an introductory rowing course and learned basic techniques. Soon, the team built up their finesse and was rowing 30km during their weekends. During this training out in the water, the team aimed to achieve 120 total hours of pre-race rowing. Although Hong Kong makes for a great environment to train on the water, given that Hong Kong waters are warmer than the Atlantic’s, Hong Kong’s typhoon season brought challenges at times for continuing regularly scheduled training.

Training for the Atlantic Challenge gave East Rows West something to look forward to and be excited for during the pandemic. The team has also been conscious that they could face mental obstacles along the way – fatigue, anxiety, or loneliness, for example – and during their months of training have had open conversations about this. One method to better build up their mental resilience that the team used was working on group exercises together and anticipating what sort of thoughts they could have when they are in the middle of the Atlantic Ocean, such as “What are we doing here?" They also discussed crisis management and what they would do in the worst-case scenario (such as what to do if a marlin pierces the hull of the boat, which actually happened in the 2013 race!). Goal-setting exercises helped to manage their expectations and remind them of all the hard work they have put into getting to where they are, and how in the end, the money they raise will go to a good cause.

OT&P became a natural sponsor for East Rows West given the long connection OT&P has had with Valley RFC – Dr David Owens is the club’s sideline doctor, popularly known as “The Doc” both on and off the rugby pitch. In addition, OT&P and Valley RFC have close ties with the charity that East Rows West is raising funds for, ChildFund Rugby (formally ChildFund Pass It Back). ChildFund is an award-winning alliance comprised of several child-focused international development organizations aimed at supporting more than 14 million children and their families in over 60 countries. Among ChildFund’s many targeted programs, East Rows West chose to support ChildFund Rugby, an initiative that partners with World Rugby and uses rugby to empower children and young people in Southeast Asia. The values of teamwork, resilience, and community in rugby are thought to teach youth valuable life skills and equip them to overcome challenges, inspire positive social change, and pass what they have learned back to their communities. Besides Valley RFC’s previous partnerships with ChildFund Rugby, East Rows West is personally fond of ChildFund Rugby since rugby enriched their own individual lives.

“Rugby holds a very special place in our hearts,” says Martin of East Rows West. “It gave me a career and allowed Rob to captain the U.K. Army rugby team in the annual Army vs Navy rugby match at Twickenham. Apart from that, we all met playing rugby here in Hong Kong. We have experienced first-hand the opportunities it provides and the values it teaches, so it was an absolute no brainer to support ChildFund Rugby.”

Childfund Rugby adopts a “coach the coach” mentality, allowing players to “graduate” into coaching positions and imparting skills to the younger generations. Interestingly, most of ChildFund Rugby’s participants are young women and girls, which may be surprising to most rugby-watchers given that rugby has overwhelmingly been a male-dominated sport and female rugby clubs have not seen equal spectatorship and sponsorship. East Rows West is excited to be able to give back to ChildFund Rugby’s initiative to bridge the gender gap through rugby and sow the seeds of leadership and confidence among adolescent girls who may not otherwise have opportunities to build those skills.

“We think [ChildFund Rugby] is a great way to educate young people…The opportunity to help improve the lives of children from poor backgrounds in Asia is something we are very passionate about and look forward to visiting the communities to share our knowledge and experiences as well as raising money for this fantastic cause.”

As East Rows West packs their bags for the Canary Islands and their long, long journey across the Atlantic, they are accompanied by unwavering support from their friends and family members. By the time the team docks in Antigua, they will be reunited with their families. When asked what East Rows West imagines what they will look forward to doing first when they get to Antigua, answers included: hugging friends and family, actually walking for the first time in weeks, showering and napping, eating fresh food, and the feeling of that first beer.

The OT&P community is excited to bid adieu to East Rows West next month and wishes the team calm seas and a memorable life experience! To learn more about the team and to donate to ChildFund Rugby, visit Cathay Pacific Cargo East Rows West.

What is Osteoporosis?
What is Physiotherapy?
OT&P BodyWorX Introduces 2 New Physiotherapists