Does your child struggle with starting  low-reward activities or staying organised? Executive Dysfunctions can manifest in difficulties of completing tasks like that, as well as maintaining attention over a period of time or even recalling recent memories.

As one of the more common symptoms of ADHD and autism, understanding Executive Functions and what it affects can help you provide better support for your child’s long-term development.

Executive Function is a broad term referring to a set of neurocognitive processes (i.e. related to thinking and reasoning). These are directly linked to our ability to feel emotions and adapt our behaviours to different social situations.

Our Executive Functions are often referred to as our ‘Higher Order’ skills because of the components involved. This includes our ability to be organised, mentally flexible as well as our ability to plan, inhibit our responses, set goals and attend, to name a few. It is these higher-order processing skills which will help your child succeed in school, at work, and even in their personal lives.

Historically, Executive Function abilities are noted to be synonymous with the Frontal Lobe and more specifically, the Prefrontal Cortex. However, researchers have also identified a seven-circuit scheme known as the ‘Frontal-Subcortical Circuits’ and three of these circuits are notably involved with Executive Functions. In this blog, you’ll learn the importance of each of those Executive Functions and the tremendous effect they can have when it comes to your child’s healthy development. 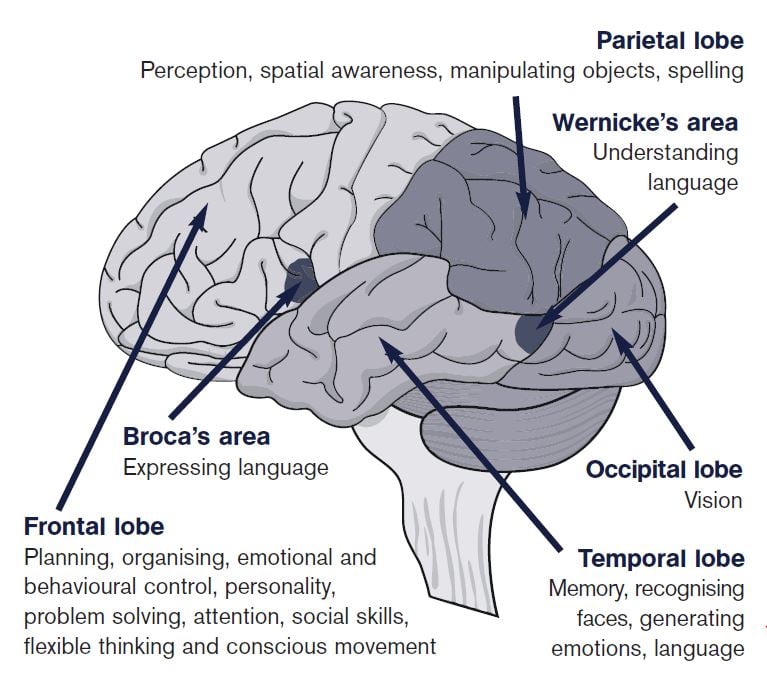 1. Attention Problems or Lack of Focus

Also known as the ‘Executor of the Brain’ for reasons that will become apparent, the Dorsolateral Prefrontal Circuit is involved in regulating many of our executive functions. It is this circuit that is most crucial for executing goal-directed tasks that your child will encounter at school and at their future job. It is thanks to this circuit that a child can sustain attention and set goals, plan for a new project school, and organise materials for the next class.

So what happens if there is damage or dysfunction to the Dorsolateral Prefrontal Circuit in your child’s brain?

Children with damage to this area often exhibit poor organisational skills, poor problem solving, difficulty focusing and sustaining attention and decreased fluency skills. In the classroom, this might present itself with constantly losing lesson materials, forgetting when assignments are due in and difficulties planning and getting started on homework.

This circuit is associated with mediating the emotional, social and behavioural aspects of Executive Functions. This includes aspects such as impulsivity, inhibition and social behaviours. Perhaps the most famous example of this dysfunction is one of Phineas Gage.

Phineas Gage is a classic case in Neuropsychology which provided many researchers with insight into the association between the brain and behaviour. Phineas worked on a railway in the early nineteenth century where he was injured following an explosion. It was in this explosion that Phineas suffered damage to his frontal lobe. Luckily, Phineas survived the accident, but it was not long after that a notable difference in his personality, behaviour and social interactions were apparent. Prior to the accident, Phineas was described as a capable, respected and responsible man. However, following the accident, Phineas began to show no empathy, became impulsive and made crude and socially inappropriate comments.

While this is an extreme case, Phineas does highlight the crucial role the Orbitofrontal Circuit plays in our daily lives and social interaction. Children with damage to this area can exhibit poor judgment, irresponsibility and are often noted to make inappropriate comments and lack self-control in social settings.

Finally, we come to the Anterior Cingulate Circuit. This circuit is known for helping us regulate our motivational mechanisms. When this aspect of a child’s brain is damaged or dysfunctional, we often see a clear lack of motivation at school or home and an overall increase in Apathy. Apathy is often referred to lack of interest, enthusiasm or concern. In a school setting, this often also presents in a lack of creativity and ability to generate new concepts.

What to Do if You Think Your Child is Suffering from an Executive Function Deficiency?

Everyone, including children, tap into these skills in daily lives and rely on many of these processes to do well in school, at work, and in social situations. However, before you attribute your child’s messy room to an Executive Functioning difficulty, it is important to highlight the development of these skills.

The Prefrontal Cortex is perhaps the most highly interconnected neocortical region of the brain and so it is of no surprise that it is one of the last brain regions to reach maturation. Many researchers speculate that the Prefrontal Cortex does not reach full maturation until the age of 25.

While that doesn’t mean you’ll need to wait until your child is 25 to see a spotless room, it does mean that our brain is continuously learning. Many of our Executive Function skills are constantly developing as we grow and learn through experience. We learn to adapt new techniques following our experiences and learn how to tackle daily life stress using these skills.

How can OT&P help?

Reaching out to a specialist regarding your child’s development may seem overwhelming at first. It is important to know that our services are designed to not only help children with existing problems, but we can also help bring out the best in your child according to their individual development path.

If you’d like to learn more about where your child is currently on their developmental journey and how to support them best, consider visiting our mental wellness clinic, MindWorX. We have a range of psychoeducation services and experienced child development professionals who can help your child excel both at school and out.

Your Child and Flu Vaccine: All the Questions You Need Answered
PANDAS/PANS: A Cause of Tics and OCD in Children
Child Nutrition: 4 Tips to Keep Your Children Healthy